06 May How to stop a meltdown

Posted at 08:48h in Behavior by Jennifer Lingle 0 Comments 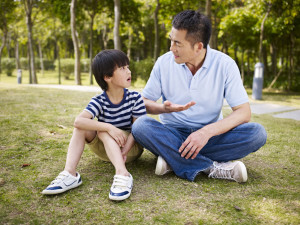 About 6-months ago, I had a conversation with two of my private clients, a mom and dad, regarding their child’s behavior. They were concerned because whenever their son became frustrated, or had difficulties communicating his needs, he melted down. They had been taught various strategies over the years from different therapists, but nothing seemed to be working. Their son was predominantly non-verbal, but was able to say a few words.

Well, the other day I had another conversation with these hardworking parents. After, trying my recommended strategies for the past few months, they reported that they can’t even remember the last time their son had a meltdown. They were so grateful for the recommendations that I provided, and explained how their home and child’s life was so much calmer.

I wanted to share with you one of the strategies that I recommended, so that you can try it at home with your child.

Whether your child is verbal or non-verbal, it’s important to let him know that you understand how he’s feeling. Nothing can be more frustrating than not being able to talk, especially when you are upset and need to get your needs met. Think about that for a moment…have you ever lost your voice, or you were in the middle of an important conversation and you lost cell phone reception? Imagine how it feels to not be able to use your words to let others know when something is bothering you.

If your child is verbal, he may have difficulties articulating his feelings. Or, he may feel like you just don’t get it, when he is trying to explain something to you. This happens often to children who started talking later in life.

When your child is trying to communicate with you, let him know that you get it. Simply say to him, “I understand that you are feeling upset. I know you wanted to ____________ and you can’t do that right now.”

By simply letting your child know that you get it, you understand what he wants, but he just can’t have that _________ (activity, game, food, etc.) right now, you are affirming his needs. Imagine what a relief that is for him. He doesn’t have to throw himself on the floor, bite his arm, or tip over furniture, because he now feels that you understand him. He may feel that you are finally “hearing” him.

He may continue to meltdown, but I encourage you to keep trying this strategy anyway. Whether your child is verbal or non-verbal, he still wants his needs to be heard. The more you let him know that you understand what he is trying to tell you, the better he is going to feel about his communication efforts. Most likely, his meltdowns will decrease, because he is learning that he doesn’t have to go through these tremendous lengths for his “voice” to be heard.